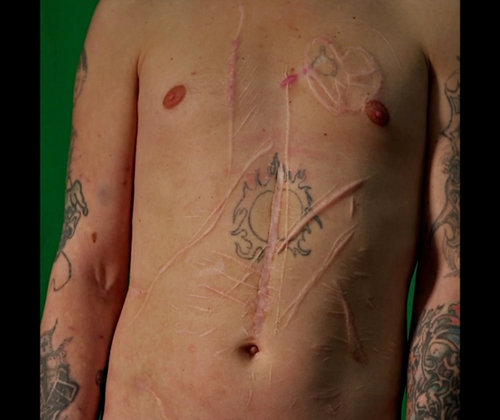 The conceptual artist and political activist Petr Pavlensky is a representative of the new wave of protest and dissident art in Russia. In their performances and actions, artists including groups Pussy Riot and Voina use powerful means of expression, also using their own bodies to fight government oppression and dictatorship. In uncompromising gestures of civil disobedience, they create situations that radically challenge the state´s mentality and its system.

The Russian American journalist Masha Gessen describes how one of Pavlensky´s earlier performances Fixation, during which he nailed his scrotum to the ground on Red Square in Moscow, “scared people on both sides of the political spectrum.” Petr Pavlensky carried out the action stating that it should be viewed as a “metaphor for the apathy, political indifference, and fatalism typical of contemporary Russian society.” With the help of social media, this metaphor spread all over the world, like an emergency flare throwing a bright light to illuminate a harsh reality through symbolic means.

Pavlensky´s art is confrontational and unflinchingly uncompromising. This is evident in the exhibition Anonymous Nationalist.

Manifestations of curtailing free dissemination of information and freedom of speech

The video Anonymous Nationalist recounts a real-life event where a murder is committed in a civilian setting but with militaristic intentions. We see the torso of a young man whose naked body bears witness to severe violence, and hear his voice recalling the fatal event in explicit language. His story crystallizes the essence of nationalist ideology without exculpatory national liberal theories or other distracting, aesthetic embellishments.

Currently, the Russian authorities actively use dark forces as an instrument of social control. At first glance it might seem that the Russian government opposes nationalists; in fact, it incites them to interfere with all sorts of community rallies and meetings of leftists, anarchists and other protesters. The government uses nationalists to provoke conflicts that require police intervention. The police are then no longer playing the role of aggressor and defender of power, but turn into a peacekeeping force, with thuggish hooligans killing one another. Today, the Russian government finds national liberalism a necessary tool to help maintain a high degree of hatred within society, and divide the opposition into smaller factions, brutalising one another, driven by their own prejudices.

Critical analysis of such forms of state control shows these precedents to be a clear sign of the state´s invasion of private space by imposing stereotypes of what is supposed to be useful or harmful. In Russia, the acceptance of such restrictions has become one of the main signs of the looming totalitarianism. A new federal law for the “Protection of children from information that is harmful for their health and development” was passed in Russia on 1 September, 2012. This law allows the state to prosecute and ban free media and to oppose and persecute sexual and ethnic minorities. Nobody other than the child or adolescent together with their parents should be able to determine what is useful or harmful for the individual. Nationalist groups often rely on this law when they prepare attacks on the opposition or when murdering journalists. They say, “We want to protect our children.”

The exhibition is financed by a grant from Iceland, Lichtenstein and Norway through the EEA Grants and by the Polish funds

Petr Pavlensky (b. 1984) – educated at the Saint Petersburg State Art and Industry Academy in Russia. Pavlensky is a conceptual artist and renowned for his powerful political interventions in public space. Notably, as a reaction to the arrest of Pussy Riot, he appeared outside an Orthodox cathedral with his mouth sewn up. He recently staged a protest in solidarity with the Ukrainian protesters at the Maidan in Kiev. He is one of the editors of the art magazine Political Propaganda. Petr Pavlensky lives and works in St. Petersburg.