The end will show what tomorrow brings 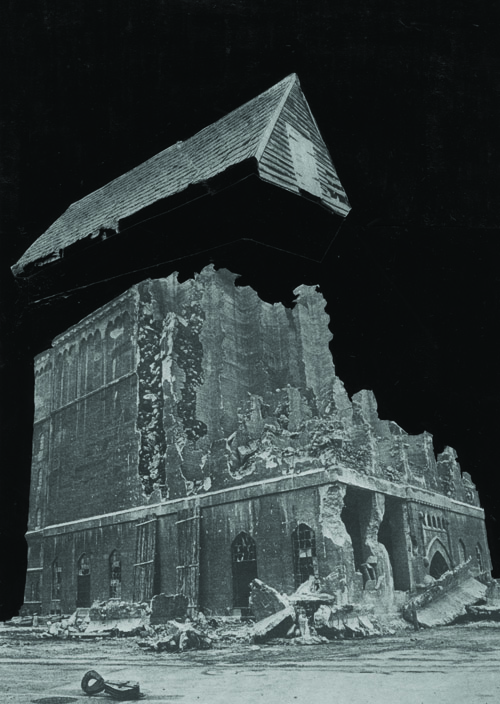 In your life you will also one day tumble. Individuals fall as well as Empires. When that happens do not expect anyone to redeem you.

You are alone in this world, free to choose your path, but still bounded by the hand you are given. Vast possibilities of what to believe in, and relate to, colours every chapter of your life. Science or Faith. Instinct or Logic. It does not matter.

When the system fails and your world shatter. You are alone.

The beeping sound in your ears and the blurred view. The uncertainty about what to come, the anxiety from within. Your state of mind paralyzed, the body responding to the signals of the massive appearance of adrenalin running through your veins. The feeling of panic clinching your throat, filling you with the urge to run away.

There are two types of us: Fighters and Runners.
…

The exhibition is supported by Culture Point North, Bergen City and the Norwegian Arts Council

… is the law of life, Synagogue at the Jewish Museum, Berlin 2008
Church and Synagogue were common allegorical figures in the Middle Ages. Draped females, they are ways of representing the transition from the Old Law to the New. Church typically wears a crown, carries a cross, and holds a chalice, representing the Redeemer’s blood. Synagogue is always a blindfolded figure, the blindfold representing moral or spiritual blindness or darkness, sin, and ignorance. Often a crown falls from the inclined head of Synagogue and the Tables of the Law fall from her hands. The poster was produced by Torpedo Press as a part of the release of the artist-book You make me want to die in the countryside, a meditation on “Heart of Darkness” by Joseph Conrad, by Liv Bugge, published 2011.
Liv Bugge’s practice incorporates a range of different mediums, in which video often plays an important part. Many of her works are situated in the borderland between dreams and reality, perpetrator and victim, science and fiction. The work often enters into different power relations, and Bugge is interested in aggression as both a constructive and destructive force in society. Bugge discusses ownership in relation to language and history with a desire to demystify, expose and conquer the established variables that help to maintain the ruling power structures in both a personal and a global scale.

As a child I grew up in a town 3 hours east of Bogotá, the main city of Colombia. On weekends my father used to bring us out of the city to eat special cakes and desserts. I remember especially from the early 80´s looking at very luxurious mansions with very exotic swimming pools, eccentric facades, from Chinese pagodas to Swiss chalets, satellite dishes, wild animals in cages, statues etc. These were mansions of the Mafia (narcotrafficantes). In the end of the 80´s the Colombian government started the first persecutions of the Mafia and it had a big influence on the landscape, the same mansions were suddenly all for sale, and after time the luxury and eccentricity were gone and they became mansions in ruins.

With this background as part of my culture and my life, I wanted to come back to this stories and tell again the stories, but from another perspective; “the aesthetics of this culture”. It is a paradox between the eccentricity to show all the wealth to get the acceptation in high society and their illegal situation always hiding themselves from the police and their enemies. Of course the topic of aesthetics in a subculture that has influenced a whole country is very grand. I decided to concentrate my work on just the architecture. My starting point was to photograph the mansions of mafia bosses that had been confiscated by the government and approach the drug trafficking problem from a domestic perspective. I took contact with the Colombian government, and after a long time lobbying, they permitted me to photograph 7 houses in different parts of the country and one storeroom with personals possession (furniture, paintings, sculptures, shoes, etc.).

The mansions belonged to different mafia bosses: “La Posada Alemana” was the property of Carlos Leder, the biggest narcotrafficante in the 70´s; he is now in jail in the USA. His dream was to make a hotel inspired of a small German village, and he was also a deeply admirer of the Beatles, so these two things determinates the decoration of the place. The place has been in hands of the government for around 20 years and is now in ruins. “The replica of the White House” belonged to Joaquín Mario Valencia. This house was his private house; he was the typical narcotrafficante who looked like a wealthy businessman. “La Virgina” is a farm with more than 1000 hectares, and Arcangel de Jesus Henao (the owner), was the boss of the North of the Valle cartel. He was extradited to USA in 2002. “El Castillo Marroqui” is a castle outside of Bogotá; the last owner was Juan Camilo Zapata Vásquez. “Las Gaviotas” is now the social club of the National Police and “Las Heliconias” is a hotel inspired in a small Colombian coffee plantation town; these were confiscated recently and they are still in good conditions. The storeroom is filled with the personal belongings of Elisabeth Montoya de Sarria, better known as “Monita Retrechera”. She was accused of helping the President (Ernesto Samper) to collect money from the narcotrafficantes to support his presidential campaign.

The images of the houses show the eccentricities of a subculture, which reflect a deep contradiction in their idiosyncrasies. Almost all the houses have altars, chapels, crosses, or religious paintings. The photographs reflect a kind of uniformity in the aesthetics; every house has a swimming pool, pool table, a Jacuzzi. Beyond the exotic tastes of the narcotrafficantes, the work underlying other aspects of this phenomenon as the actual state of the houses; some are in ruins, others still have the furniture and objects of the ex-owners and others still function as normal.

These images show ambivalent feelings between the brilliance, luxury in contrast with the emptiness and decadence of the houses. At the same time there is a confrontation between the way media presents this phenomena and how these photographs approach the same topic from another perspective, the every day life of these people with their families, but with the absence of people, telling stories through the traces of people.

Yamile Calderon (b.1974) Studied photography at Bergen National Academy of the Arts. She lives in Oslo where she also works as a lecturer at Oslo Photo Art School. She published her first photo-book “From His Point of View I am an A4 Person” in 2008. Calderon has participated in various collective exhibitions and has presented her work in the International Photography Festival, Pingyao, China and Hong Kong.

Calderon´s photographic work is influenced by her background as a journalist and her work as an artist. She works in the documentary field and her interests are very much in social phenomenon and identity. She works mostly with portraits, interiors and landscapes. Calderon is interested in analysing the role of contemporary documentary photography, and she wants to be part of the debate and exchange of ideas about different visual and narrative strategies to tell stories and interpret the reality.

Timeline
A series of collages and reworked found images forming an open-ended narrative. Thematically the work revolves around the idea of narratives itself, how we construct a story, or fiction, and how we read it, what we read into it. Another theme is that of the past and its relation to the future. In science fiction literature there is a term called the «what if»-scenario. I consider these images to represent a similar scenario; this is what the world could have been like.
I’m interested in failed ideologies, technological optimism, inventions that were never made, paper architecture, etc. I’m also interested in both utopias and dystopias, and how one often turns into the other.

Håkon Holm-Olsen (b.1982) is a Norwegian artist currently living and working in Bergen, Norway. He graduated with an MA in fine art from Bergen National Academy of the Arts in 2012. He works mainly with found material, which gets reworked and turned into drawings, collages, sculptures, animations, installations, and even books. Thematically his works revolves around the exploration of narrative structures, and a fascination for the relationship between the past and the future, the real and the invented/artificial/fictional/etc.
Since 2006 he has participated in various group shows and events in Norway, Sweden, and the United Kingdom. He is also a board member of the newly founded studio collective Blokk in Bergen, Norway.

“Komm, süßer Tod” (Come, Sweet Death).
This is an artistic project in collaboration with one of the most respected figures in the Norwegian Black Metal genre; front singer in the band Gorgoroth, Kristian E. Espedal A.K.A. “Gaahl”.
In “Komm, süßer Tod” Espedal, though still a lead singer, will perform in a significantly different context than the ones he has previously been working within.
The physical installation consists of iron chains, hanging from ceiling to floor, forming a circular room that the public can enter. Here, one will be able to listen to the recorded material in a quadraphonic loudspeaker setup, with Espedal singing the following lyrics:
Komm, süßer Tod, komm selge Ruh!
Komm führe mich in Friede
(Come, sweet death, come blessed rest!
Come lead me to peace)
This stanza, from Johann Sebastian Bach’s work by the same name, expresses and explores the concept of liberation through death.
In addition to the theme of death in this work, there are several other similarities between the aesthetics of Black Metal and the baroque style represented in Bach’s music. Both genres contain great pathos and drama; the music is virtuous and characterised by long flooding melodic lines with ornamentations and trills.
This concept has great musical and artistic potential, located in a crossover-landscape that I find particularly challenging.

Marte Gunnufsen (b.1980) holds a MA as a classical pianist from the Edvard Grieg Academy in Bergen 2010, and is currently taking a BA in fine art at the Bergen National Academy of the Arts. Gunnufsen was presented in a duo exhibition at Bergen Kjøtt 2011, and participated in Høstutstillingen (Annual Art Salon in Oslo) 2011 and 2012. She has carried out performance art collaborations with artist Tori Wrånes, and performed as a musician at festivals like Festpillfesvtivalen, Ultima, Avgarde, Hovefestivalen, and Vinterlydfestivalen.