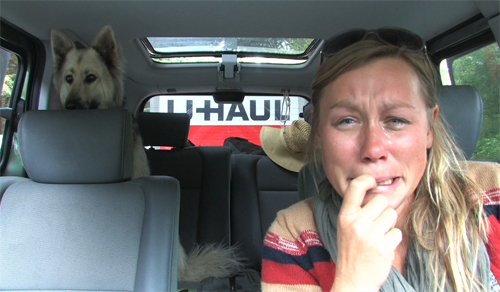 Purchased a vintage motor home, fixed it up and headed out to experience the unknown. That was the romantic plan — escape urbanity, leave the studio and embrace the open road. Interested in encountering wisdom within a temporary autonomous zone, questioning lifeworld and engaging in existential quandaries, I set out to confront the idea of both outsider isolation and insider community. The archetype became a way of studying relations – to strangers, the elements and the psychology of symbols. Interwoven social roles, specifically that of the father figure, involving power, respect and trust is fore grounded.

An inexplicable chemistry unites them for nine days on the road. Beginning in Slab City, California, an outsider’s haven (where they meet) and commencing at her birthplace in Seattle, Washington, they explore the dynamics of attraction. [subtext: They plan to conclude their journey by meeting her estranged father. Halfway up the coast, they learn that he died the day they left Slab City.]

Lindsay Foster was born in Seattle, Washington in 1980 and is currently based in Seattle and Los Angeles. She received a BA in Sociology and Studio Art from the University of Puget Sound in 2003, and went on to study Photography and Film at Rockport College/Maine Media Workshops receiving a Post Bachelor degree in 2004. Foster earned her MFA in Photography & Media from CalArts in 2008.

Downward Ascension (Ode to the Flaneur)