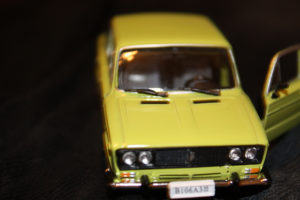 Naturally colored or touched up with a bit of digital rouge, the young woman is the most popular and overworked image of living, contemporary human beings in the mass media.

Full-breasted and full-blooded or perhaps, on the contrary, shapely to the point of emaciation, she is used to advertise oranges, television sets, and all manner of tours and tournaments.

This young woman, even when she simply biologically lives her life, is a powerful attractor, a top-of-the-pops, prototypical deputy of life, unlike the oldster, the child, and the young male.

And so I have made this young, blossoming, warm, and attractive woman a character in my graphic art, works neither funny nor fun, but which agonizingly pursue an answer to the question, What can contemporary street graphic art talk about, if not the crisis of the individual, demoralized and degraded by self-mockery?

…all these young women are meaningful to us because they help us purchase oranges and TV sets, and sign up for package holidays.

But what matters to these young women themselves?

Perhaps the state of affairs in the fatherland, at home and abroad?

Ah, were this only the case, were these things to matter to young women, what a world this would be!

Exfoliation of society is a project that is also meant for them, for young women.

Petr Bystrov (1980, Moscow, Russia) studied philosophy at the Russian State University for Humanities Moscow, from which he graduated in 2002.  Since then he also works as an individual artist, performer, spokesman; curates other artist’s projects, as well as teaches.  From 1999 to 2005 Bystrov was a member of Radek Community, a group of artists, authors and cultural activists known for their radical style, whose direct actions most of which were held on streets combined the aesthetics of actionism with profound theoretical studies.