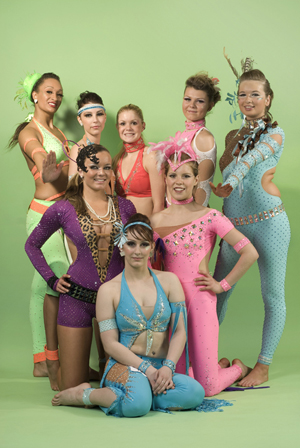 The video work “Der dunkle Mensch” shows a disco dancer alone in a blackbox filled with intense disco lights, techno trance music and a German voice over. The lyrics is written by the artist and the music was made on commission ​​by Andreas Mjøs (Jaga Jazzist) with Anneli Drecker (Bel Canto) on vocals. The work deals with people’s inherent fear of meaninglessness, and how this for better or worse, can create an uncompromising driving force to find existential meaning through faith, system and order.

The photo series “Reach Out and Touch Faith” conveys the intensity of the sports and we are pulled into a universe that appears to be based on physics, looks and charisma. From this point of view the artist finds room to comment on the subtle borderlines in our common understanding of high culture and popular culture. As the borders fades we are confronted with the need to categorize our surroundings.

Jorunn Myklebust Syversen (b. 1978) graduated from the Art Academy in Bergen in 2005 and is currently based in Oslo, where she works as an artist with video, film, installations and photography. Myklebust Syversen has participated in numerous exhibitions, screenings and festivals nationally and internationally, including “Lights On” at the Astrup Fearnley Museum of Modern Art / record, “Alone in the Dark”, Artists’ Association, Project Space at Gallery Transformer in Asker, “Short Film Festival “Grimstad,” Autumn Exhibition “, UKS,” Rencontres Internationales “in Centre Pompidou, Reina Sofia and the House of culture der Welt,” Unclassifiable “at the Malmo Festival, Künstlerhaus Bethanien, Berlin and Lower Manhattan Swing Space Program, New York.

“Violent Sorrrow Seems a Modern Ecstasy No.2” is Syversen´s first 35 mm short film. The film was released by the Norwegian Film Institute on the DVD compilation Norsk Kort 009.