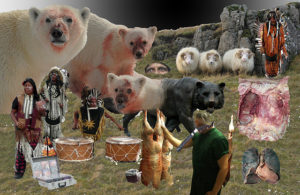 Motivational Pang contains a series of paintings/collages ”The Black Period” made only minutes before the Icelandic Bank Collapse in 2008. The work is sinister in nature yet has hilarious undertones; it is prophetic in spirit and depicts the commencement of the end times. The work is done with inflated glumness; a methodology developed by the artist that he calls the “rough and ready technique”. The same method is  used in another recent series called ”Primacy of Buoyancy” that has a more hopeful pallet despite the oppressing imagery. It is embellished with cheerful optimism in the face of pending day of reckoning. A series of fifty articles written and illustrated by the artist for the weekly Financial News from the period of May 2008 to February 2010 is also included. The articles give a prickly representation of a society in a deep crisis. Handy objects soothingly crafted in preparation for kingdom come is to be seen in ”Empowering Upper Wands”.

This is the first solo exhibition of Ásmundur Ásmundsson in Norway. Ásmundur has had several solo exhibitions and participated in numerous group exhibitions, notably Hole at Reykjavik Art Museum and Momentum 2009 – Favoured Nations, the 5th Nordic Biennial of Contemporary Art, Moss, Norway. He has also written articles for newspapers and magazines and curated art exhibitions, notably Koddu which he co-curated in 2011. In 2010 Útúrdúr published a collection of his speeches.